British Champion skater, Danny Aldridge, from the Dame Kelly Holmes Trust, visited the school on the 29thJune. He led workshops with each class during the day, giving demonstrations of skating tricks, including jumping over teachers!

Danny started skating when he was 10. After winning local competitions Danny soon progressed on to becoming the Under-13s National Champion. Danny has toured across in World including an 8 week Europen Tour with Roces, and has travelled extensively with Team Extreme taking part in shows across the World.

See below videos of Danny skating and jumping over teachers. 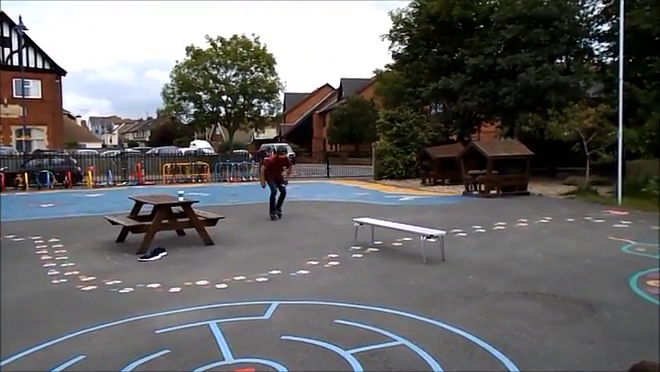 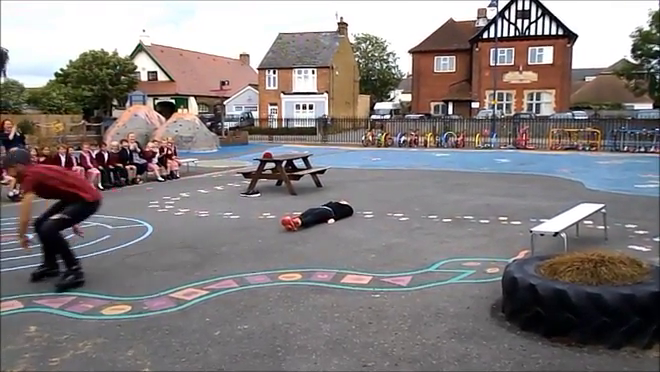 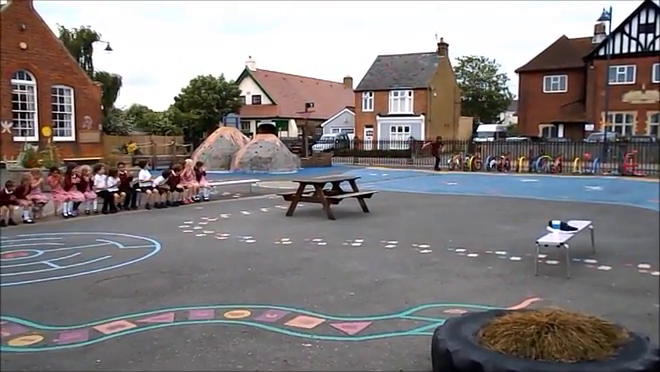 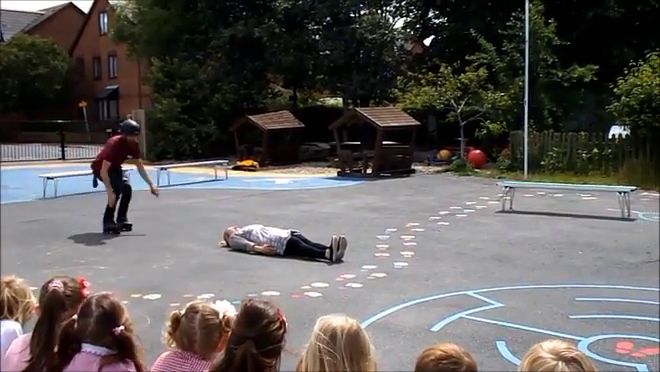 Our Sports Day was held on Wednesday, 22nd June in the school grounds.  It involved a series of fun sporting activities including parent races.  It was wonderful to see so many of you enjoying (and participating in) our ‘Olympic Games’! The children were superb I am sure you will agree.

Thank you to all of the staff team for supporting the children in this event.

The Westmeads Choir were invited to take part in this year's Infant Singing Festival at St Alphege School, Whitstable. The event took place on the 30th June and included some collaborative singing of some pre-taught songs with other invited schools, as well as a performance of our own song. Well done to everyone who took part.

We had great fun on Friday 17th June when we took part in a Samba Dance Workshop.  We were able to learn all of the moves necessary to create our very own dance which was revealed at Sports Day!

We were able to celebrate the Queen's Birthday in style this year with a kite flying celebration.  Every child spent time making a Union flag kite, which we then took out to the playground for a test run.  Despite the lack of breeze we did a rather good job!

We are delighted to inform you that the Film night was a great success and we managed to raise £184.71 towards the Family Room refurbishment.  A big thank you to the Friends for arranging and supporting this event and to those pupils who came along to enjoy the film and popcorn.

A couple of our pupils received Lego prizes for having the best flags at the Buster's Big Bash event that was held on Saturday,14th May.  Well done!!

Year 2 took part in an Explorers Workshop on the 9th May 2016, where they were involved in a variety of workshops and activities, allowing the children to experience life as it would have been in a Tudor household.

The Year 2 Football Tournament took place on Tuesday, 3rd May 2016, at the University of Kent Sports Complex. Further photos of the event can be viewed in the PE section.

The Year 1 and 2 children have been really enjoying their Appeti Tennis lessons from an external coach.  More photos can be viewed in the PE section.

The school was treated to a demonstration by Morris Dancers on the 29th April.

The children celebrated St George's Day by dressing in red and white or as a dragon or knight.

Skating extra curricular activity was offered to some Year 2 children. Please click here to view the story in the Kent Sport magazine ' Pulse' on p4-5.

A lovely window display created by our pupils was displayed over the Easter holidays in Jelly Beanz in Whitstable.

Parents/Carers were invited to join in the creative activities during DT week. The creations were based on Growing for Year 2, Superheroes for Year 1 and Transport for Year R.

The school mural, in the corridor by Early Years entrance has now been completed.  A big thank you to Andrea and Simon Cornish for their fantastic work.

Thank you to the children for dressing up in sportswear and taking part in sporting challenges to raise money for fantastic causes for Sports Relief. Together we raised an amazing £249.81. Thank you.

Some Year 2 children were chosen to represent our school in the Infant Agility Competition that took place on the 16th March at Herne Bay High School. The children did very well and thoroughly enjoyed taking part.

A selection of children took part in Folk Day that was held on the 16th March at The Community College Whitstable.

The children had the opportunity to work with musicians, participate in song writing and dance workshops and celebrate as a Coastal community with our local schools.

During Book Week, Alan Durant, author of many great books for primary age children visited Westmeads to talk to the children about his work.  Alan is an internationally renowned author and we were delighted to have him visit our school. The children also had the opportunity to buy a book and get it dedicated to them and signed by Alan as a permanent reminder of the day.

From the sales at the Book Fair, we managed to raise an amazing £505.00 to spend on books for the school. Thank you to everyone for your support.

To mark the end of Book Week, the children were asked to dress up as their favourite fairy-tale character (as well as the staff!).  The children also took part in the 'Character Challenge' competition that was judged by Alan Durant and those who won received a special book prize.

Parents gave very generously for the aid for Calais on 10th March, which was arranged by one of our parents, Nancy Clark. Thank you.

Parents came to read with the children on World Book Day.

The creation of our new mural is taking shape.  Here are a few photos showing the progress so far and the processes involved.

Wow! Thank you to all the children and staff who worked so hard to create such wonderful artwork. This is just a selection of images; we have enjoyed looking at everybody's amazing collages, pastel, pen and pencil drawings, and beautiful paintings.

The children had lots of fun taking part in Pancake races on the 9th February; as did some of the staff!

Year 2 classes enjoyed a visit to St Alphege Church on the 5th February, where they had a tour of the church.

Congratulations to our team of Speed Stackers, who came 3rd and 5th out of 16 teams at the recent Speed Stacking Competition that took place at Hampton Primary School.

Each term we invite our parents and carers into school to look at their child's work. The children  love to share their learning and to tell them all about what they have been doing.

On Wednesday 6th January we were lucky enough to welcome the M&M Theatre Production Company with their performance of Aladdin.  Judging by the laughter and participation in the hall it was enjoyed by many of us.

Today all the children and staff 'shook it all about' doing the Hokey Cokey in the playground!

The children had a cracking time at the whole school Christmas Dinner this week!  Mrs Ball and her wonderful team dished up a delicious meal on the day.  Thank you to everyone who helped to make the event a huge success!!!

Congratulations to the successful applicants for the Post Person jobs at Westmeads!  Their job is to deliver the Christmas post daily at lunchtime.  The skills required for the job are reading envelopes, organising into classes, and efficient delivery.  There were so many fantastic applications received, thank you to everyone who was interested in working at school.

The children enjoyed a fantastic morning filled with festive activities last Friday at the Christmas Activity morning. They also were lucky enough to receive a special visit from Father Christmas on the day!  In the afternoon parents/carers had the opportunity to do a bit of Christmas shopping at the craft market which was filled with amazing art and gifts from local makers.  All round it was a great event and would not have been possible without all of the hard work from the Friends of Westmeads, parent volunteers and the generous donations from all  of the families.  Thank you to everyone who helped to make it a success!

The children enjoyed a wonderful morning learning how to play the African Drums, after which they performed in the school hall to the parents and carers of their class!  Well done everyone!

The children of Westmeads decorated their very own paper lanterns to help light up the streets during the Christmas Lantern Parade this year.  The Christmas lights were switched on during the event and the children even enjoyed a magical snowfall too!

October was Black History Month and we participated by learning about the rich cultures and traditions of black communities. All classes celebrated this by learning about a famous person in ‘Cultural Awareness’ week.

Green class sketched pictures of Martin Luther King and learnt about his life.  The class created a display showing all their hard work.

Thank you for all of your donations for the Bring and Buy Sale organised by the School Council, an amazing £308 was raised today for Children in Need. Well done everyone!

The children had a wonderful visit to Duncan Downs to explore the habitats of the local animals and creatures.  They learned all about the various foods that the creatures forage and eat.  They also found out that in WWII the downs were used as a lookout point because of the uninterrupted view of the Thames estuary.

We were delighted to be awarded with the Canterbury and District 'Summer Reading Challenge' trophy this year. Westmeads had the highest percentage of children who completed the challenge! Congratulations to all who took part.

Our Visit from the Dogs Trust

The Dogs Trust visited all the children today and the children learned all about caring for a pet dog.  They also enjoyed meeting Paddy very much!

Our Visit from the Guide Dogs

We had a wonderful visit from some guide dogs and their owners on Monday 19th October. The dogs were very calm and well behaved - a bit like us! We know that when a dog is working it will be wearing its special harness and should not be disturbed. Here are some photos from our visit.

The children did a brilliant job of decorating their Pennies for Porchlight houses as well as filling them with lots of pennies for charity.  All the children helped out at home in exchange for the pennies.  The monies have been donated to the charity to be counted and recorded.  We raised an AMAZING £692.92 - wow!  Thank you to everyone who made a donation.

Year 2 scare the birds away!

Year 2 have been busy creating scarecrows for the Scarecrow Trail in the Westgate Gardens in Canterbury. Charlie the dog was very impressed to see them there! They also travelled to Whitstable Castle to participate in their Scarecrow Trail too. We hope you managed to see them.

Each term we invite our parents and carers into school to look at their child's work. The children  love to share their learning and to tell them all about what they have been doing.